Is just getting found your biggest marketing problem? I’m going to guess maybe not.

I was in a group of freelancers and small web agencies owners this week talking about goals and plans for 2019. One of the guys in the group was talking about how he’s got big plans for the year and how he really needs to start marketing this business more intentionally. He said “I know, I know… I need to start a blog.”

He seemed super resigned to it, like blogging is an absolutely-no-questions-asked-must-do in marketing.

I just wasn’t sure that was true.

Traffic is way up. After digging in a little bit I realized that a few blog posts I wrote from the last year or so are ranking really well on Google and bringing a lot of traffic.

But I was honestly confused. The site doesn’t feel like it has a lot of activity going on other than spam comments. As far as conversions, the website only generated 3 legitimate inquiries during that time despite getting 16,000 visitors.

I felt like there was an awful lot more activity going on on my niche business website at SaraDoesSEO.com. So to compare, I headed over to the Analytics for that site and I found that in the same time period, three months, that site got 2,600 visitors.

Comparatively, in that same time period, 2600 visitors generated 99 email opt-ins and 9 inquiries that turned into consultations.

Here’s what I learned from comparing those stats—Getting more traffic and more visibility doesn’t necessarily mean getting more business.

I think the niche site is performing a lot better because I know who I’m talking to and those people, when they land on the site, know that they’re in the right place.

There is some sort of small next step that they can take, an email opt-in or getting pricing, and that makes it a lot easier for them to move forward and convert into a lead.

On a lot of generalist websites (including mine) we see a call to action that’s says “Start Your Project Today!” That’s a pretty big jump when someone lands on your website to read a blog post.

To sum this up, I’m really not surprised by these results, but it did give me a lot to think about. I wanted to share it with you because I think it might give you something to think about too as you’re planning for your marketing for 2019.

Is blogging necessary? Is just getting in front of more people really the answer? I would dare to say… maybe not. 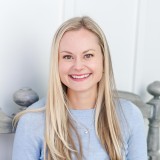